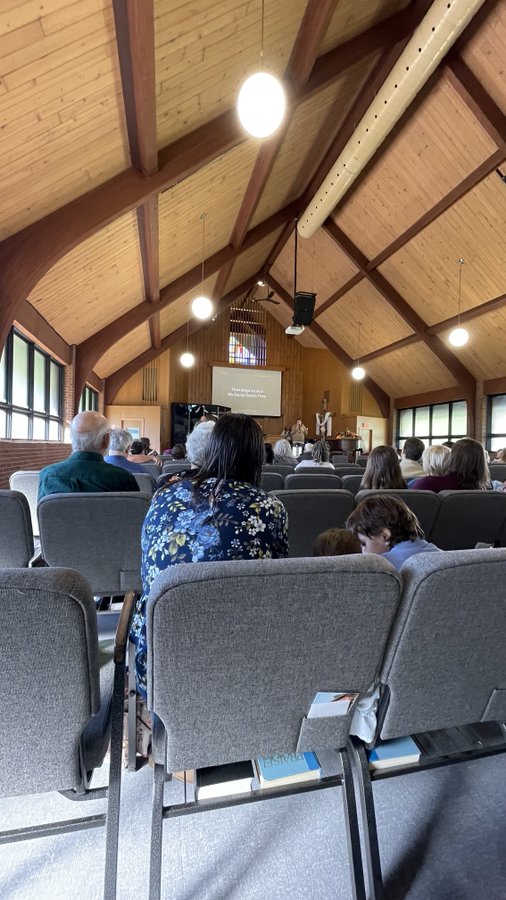 I had planned to visit Lynnville United Church, but I can’t figure out what time they have their service (the sign out front, their website, and the note on the door are all different).

So; I was 5 minutes late getting to Grace Baptist Church. The parking lot was nearly full, and as I came in, I was warmly welcomed and handed a bulletin.

The church was quite full; maybe 50-60 people, even using the balcony upstairs. The chairs were comfortable, and the band played late 90’s Christian rock. This was also the first church I’d been to where I’d seen nonwhite people. So I had hopes.

Then Pastor Mike Holt took the pulpit, and things began to shift.

The readings were focused on Colossians 2, which, while dense reading, are all about warnings against false prophets.

Pastor Mike Holt began using the text to warn against “the false teachings of science”.

He said “this is something we heard constantly during the pandemic” and that it was “spiritual warfare”.

He went on to tell how he had been so sick and weak this past week that he had been forced to lie on the couch for days. “But God.” He apologized to the congregation for his voice. During communion, seeming to forget his mic is on, his coughs reverberate through the church.

My mask is ON.

After communion, they sing another song, and dismiss.

A lady rushes up to me, introduces herself as one of the deacons’ wives, warmly welcomes me, begins to interrogate me in that very churchy way (do you live in the area?) and asks if I’ll be coming back.

I attempt to untangle myself from her politely, but she’s insistent. “Are you visiting? Are you looking for a church home?”

I told her that it is unlikely that I’ll be returning. She doesn’t let go. “May I ask why not? Your parents live in the area, right?”

Dear readers; I let this poor woman have it.

I said: “Frankly, I was pretty shocked by your pastor. Everyone has been so nice and friendly. But what he was spouting from the pulpit? I’m disgusted, honestly. Colossians is all about false teachings, and he’s up here DOING it.”

Some middle-aged dude has come up to eavesdrop in the background, but quickly realizes he doesn’t want any part of this, and turns away. She gets quiet and goes “I understand. I’ll be sure to relay this to the pastor.”

I replied “I sincerely hope you do”, and got out of there.

TL;DR: went to a church with an actively sick pastor who uses scripture to argue against science. 2/10, do not recommend.