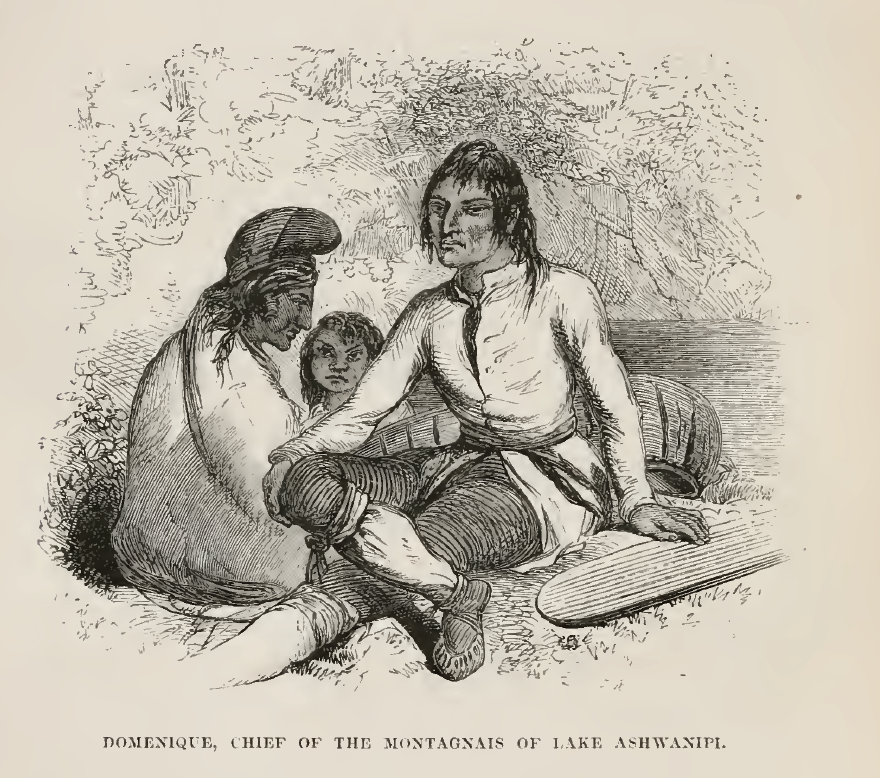 While I am in Kawawachikamach, I am taking Naskapi 2 from McGill University, which my Dad, Bill Jancewicz is teaching.

One of our assignments was to read a portion of a book titled Explorations in the Interior of the Labrador Peninsula by Henry Youle Hind.

The excerpt I read is available below.

Reading the selection from Explorations in the Interior of the Labrador Peninsula was fascinating for me for a number of reasons. There was a peripheral fascination with the pet beaver and the tools they used and how they travelled. But I was much more interested in the interactions between the various people in the story.

I loved seeing Domeninque’s interactions with his wife. It is quite clear throughout all their interactions that they are in a strong partnership. Domeninque consults with her at every single interaction, even calling her over to participate in conversations when Hind and Louis attempt to talk to him alone. Even though Hind doesn’t even bother to learn her name, it is clear that she has equal footing in every decision that is made.

It was quite clear to me that the Innu chief Domenique did not trust Hind at all, even from his caution when he first approached them on the river. Louis, who serves as Hind’s translator, detects Domeniques hesitation in helping Hind at all at a very early stage. He delays Hind’s request for Domeninque to give him Michel, a young orphaned Naskapi boy, multiple times. He intuits quite well that Domeninque does not want to let Michel go with Hind.

Domeninque has had a lot of experience with white colonizers, being a member of one of the tribes that were first contacted by the French, and it is clear he does not trust Hind at all. I really want to read the rest of the story to find out what Hind ultimately does.

I also got kind of annoyed with Hind as the story progresses. It’s clear that he values Native people and hires and pays them quite well (a dollar a day is near the top of what going wages were for the time period) and yet he repeatedly ignores or resents their advice throughout the narrative. He gets told by multiple people that the water is too high, making it dangerous to continue, by people who grew up and know this territory. And he ignores them, even though he’s paying them for their expertise. Hind even calls Louis “talkative and bumptious”, when he sees Louis is at ease talking with Domenique, despite having just used the man for multiple pages of repeated and redundant questions about the previous winter’s hunt and the icy conditions ahead.

Hind then goes on to make racist remarks about how he knows how “Indians are deferred from any efforts involving great labour”. The high water in the Moise River is a life or death situation, and not something to be taken lightly. This attitude of doggedly pushing through any obstacle in their path is what led to the death of many white men who first landed on North American soil.

Hind seems at face value a neutral observer who simply records the things happening around him, but it is clear to me that as soon as his ego is at stake or if he feels himself the professional in the situation (despite having never travelled this part of the world), everyone else’s advice and opinions are null and void.

It is clear to me that Domeninque sees himself at a clear disadvantage in this situation. He and his family are alone on the river, and encounter a rather large (and uncounted in this section of the book) party entirely composed of men. Though the power dynamic is quite strong against him, and he fiercely protests the taking of Michel still. He makes the correct argument that Michel is the one and only failsafe his family has of survival should anything happen to him. Despite all this, Hind again does not take the Native person seriously, and asks Louis if Domeninque’s death threats are legitimate or not.

I look forward to reading more.