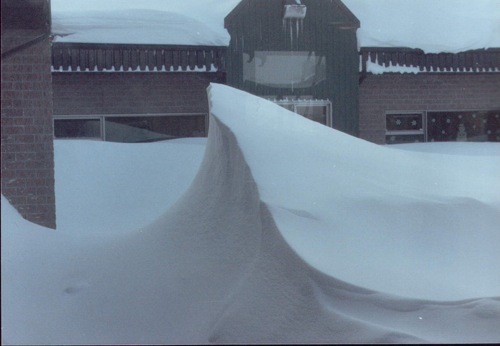 When I was a kid, my school changed teachers so quickly that sometimes they didn’t even last a month. I lived on the Naskapi First Nation of Kawawachikamach, which was really remote, and a lot of the teachers just couldn’t cut it. Most of them were fresh out of college, and while they’d been enticed by the high pay, free housing and free transportation, most weren’t prepared to deal with the isolation, cold, and the challenge of teaching students who had a completely different language and culture from them.

Consequently, every fall a new batch of teachers would take the long 14-hour train ride to the village to replace those who gave up. It was like having a substitute teacher every year, at least for the first few weeks.

We often pulled a variety of pranks on the new teachers; hiding all the writing utensils, turning off the heat to the room, swapping names with each other… but our favourite prank was to pretend that none of us could speak English.

Naskapi people come in a variety of beautiful shades, from a deep auburn-chestnut to a golden-amber, to others who are paler than me. The latter is pretty significant, given my Polish and Irish ancestry, but it allowed me to blend right in and be invisible to the incoming teachers who never suspected I wasn’t Native.

One teacher, in particular, we got really good. Her first day, she entered the class with her books and began writing in on the board, and then turned and asked us our names. Of course, none of us responded, pretending not to understand a word, until finally my friend Sonny stepped forward and pretended to translate for her.

“Well, tell them I’m very pleased to meet them and look forward to teaching them about economics,” she said, clearly relieved to have help.

“<She apologizes for the smell of her armpits, and hopes we aren’t all offended by her poor taste in clothes.>” Sonny said in Naskapi, keeping a straight face. The class snickered, trying to remain composed.

The teacher eyed Sonny suspiciously but went on. “Please ask them to say their names so that I can take attendance.”

“<She says the reason she is so skinny is that she only eats white people food, and hopes some nice strong Naskapi man will marry her and hunt for her so she grows strong and thick.>,” said Sonny in Naskapi. The class exploded in giggles, and a boy in the back of the class hollered “<I volunteer! I’ll make sure I make her a nice tent out in Greenbush (a hunting ground several days drive from the school)!>”.

The students began rattling off the most ridiculous Naskapi words as names, each trying to outdo the last, pretending to be in the wrong seat, and switching desks. Eventually everyone was out of their seats in a mass jumble of comedic confusion, and of course, none of the names any of us were giving was on the attendance list.

When it finally came to my turn, I blurted out “Waamistikushiish!”, which means “white boy”, and Sonny just lost it. “Yup!” he said through tears, “That’s him! He’s the Waamistikushiish!” As he and the class howled with laughter, the teacher retreated behind her desk, glaring angrily at us.

As we laughed, she got more and more exasperated with us only speaking Naskapi and began to get visibly angry. “I can’t stand it!” she finally screamed, slamming the attendance book down on the desk, “I know some of you have got to speak English, this is Secondary 4!”

“<Shut up, you skinny white mouse! You don’t know anything about anybody!> Maybe learn to speak before you teach!” shouted one of the boys back at her. The latter part he said in English, and the teacher’s eyes got wide. “I knew it!” she shouted, “This is all just a huge conspiracy against me!” and with that, she gathered her things and stormed out.

We laughed, we had won.

Later, during lunch, I thought more about what she’d said. Conspiracy. I didn’t know exactly what it meant. So after playing some floor hockey in the gym, I went to the library to investigate.

Sometimes when I would get bullied, I’d retreat to the library to read. It was dark and warm and quiet. I pulled the dictionary off the metal shelf and headed back to my spot by the back windows near the heater.

There were multiple definitions, but the one that stuck out to me was the one about uniting to work together to achieve a particular result. Of course, we had done that. We’d conspired to unseat her as an authority and to undermine her.

But it also surprised me to realize that we felt the same way about her. To Naskapi kids, she represented a conspiracy of oppression, and of cultural erasure. Here she was, coming up from the south with her comrades, to teach ONLY in English, using textbooks steeped in white Western culture. Some of the history books we read didn’t even mention Natives at all.

Though this was the first point in which I truly understood the word, I’d heard it before in the lyrics of rap music that had taken the community by storm. Someone had gone down south and brought up “The Score” by The Fugees, made over 30 copies of it to distribute to everyone, and from that point up until today, hip-hop and rap are still the top genres consumed by youth in the Naskapi nation.

A conspiracy was something that was done against black and brown people. It represented plans and techniques and methods to undermine and subjugate people of melanin, but even those who recognized it would get dismissed as “conspiracy theorists”, and ignored.

But you, dear friends, must build each other up in your most holy faith, pray in the power of the Holy Spirit, and await the mercy of our Lord Jesus Christ, who will bring you eternal life.

In this way, you will keep yourselves safe in God’s love.

In Jude’s letter, he’s encouraging the followers of Christ to help and to support one another and to remain true to Christianity.

It’s thought that Jude was written around 65 C.E., long before Christianity was adopted by the Roman Empire. It was shared and distributed by a group of small struggling churches, the same way Paul’s letters were. His brief and charged words read like a rallying cry, and in many ways that were their very purpose. Oppression was something these tiny churches knew well and lived in the ever-present danger of being undermined both internally and externally. His call to “build each other up” and conspire with one another is something that had to be done for their very survival.

The Christian church doesn’t exist in this state anymore, especially in the United States. And in many instances, it’s moved from being the oppressed entity into becoming the oppressor. One of the church’s biggest forms of oppression has been its silence in the face of tyranny. Black men are shot, the homeless are abused, Muslims are thrown down stairs and set on fire, people are denied rights because of sexual orientations, Natives are lied to again and again and again. And all the while, the church is largely silent.

Oppressed peoples are used to having conspiracies set against them. Organizations of revolutionary action like The Black Panthers and The American Indian Movement often suspected infiltration and monitoring by the government but were so often dismissed as being paranoid that it became a joke.

It’s been so ingrained and expected at this point, that as Kendrick Lamar writes in my opening quote, “Last time I checked, [Illuminati conspiracy] was the biggest racist party.” He talks about his fate as inevitable; a constant a fight against a machine that wants to kill him.

But what if we flipped that? What if we used conspiracy in such a way that we united with each other to overthrow and undermine the very forces that would seek to undermine us?

This very project, an Advent publication called #FuckThisShit seeks to undermine and subvert the oppression that the church perpetuates. It seeks to speak loudly about injustices in a way that shakes the ground and shakes our beings, and that shakes the church to its very core.

And the pushback has been tremendous. Pastors have been threatened. Bishops have been complained to. Writers have been harassed. Friendships strained thin and broken. But what if that’s what we’re actually called to do? What if that conspiracy is dividing while it simultaneously unites?

We are using these words because they are troubling. They are unsettling. They are being used to move us from places of complacency.

Jude says that now is the time for action. Now is the time to have strength. To listen to the power of the convicting Holy Spirit. To study the Word, in all of it’s subversive, heretical, anti-establishment power. Where will you be while you wait for “the mercy of our Lord Jesus Christ?”

I’ll be in the back of the class, undermining authority, speaking Naskapi, and fucking shit up.