So, I was involved in a car chase this morning.

I decided to drive in this morning, and was just about to enter the city while driving along the Baltimore-Washington Parkway when I got side-swiped.

I was driving along in the left-hand lane in pretty dense traffic. No one was going over 50 because it was pretty packed, when all of a sudden this large red Lincoln Navigator comes roaring down the center lane. I’m about to pass a white van that’s sort of lumbering along in the center lane, when she suddenly swerves into my lane!

I hit the horn and the brakes at the same time, but it’s too late. The rear of her Navigator smashes into the front of my Subaru Forester, sending bits of plastic and glass from the lights raining down on my windshield. The giant SUV swerves wildly at the force of the impact, then she regains control of the it. I sighed and put on my hazard lights and began slowing down, when all of a sudden, she hits the gas!

In that split second, I realized that A., I was in a hit and run, and B., if I didn’t get their information, that was it. I’d have a bashed up car and absolutely no way to get it fixed. The poor thing is an aging 2000 Forester, and our one and only method of transportation. You may recall similar feelings when nearly the exact same thing happened in January. So I did what any desperate maniac would do. I hit the gas and followed her.

I had my phone in the cupholder on the dash and put in my earphones and dialed 911. I caught up to her at about 85mph, and she’s weaving through traffic all over the place, cutting people off and trying to loose me. The 911 call center, after realizing what was going on, put me through directly to the Police car dispatcher.

Our engines roaring, people honking and tires squealing as she cut them off… It was like the movies.

I start describing the Navigator to the dispatcher as I am bobbing and weaving through traffic trying to keep up with her, and giving a play-by-play we pass landmarks and begin turning onto local roads.

She veers off the 50 West split, with me hot on her tail. We get caught at the US1 light, and I figure at this point. But she crosses over 3 lanes while the light is still red, still trying to get away from me. The dispatcher starts calling cars while he still has me on the phone, directing cars to the area trying to cut this person off. At this point, I realize I have no idea who is in the SUV. The windows are tinted and dark, and I have no idea if they’re armed or not. The dispatcher advises me to continue following her, but to keep my distance.

She charges down some local roads, and I start hearing sirens. Finally, she pulls a U-Turn and pauses at a dingy, beat up looking auto-repair shop. I screech in, and box her in, putting the Subaru in park. I’m blocking a lane of traffic, but I don’t care.

This dispatcher asks me if I see any cop cars around me, and I wave one down who’s at the traffic light we had just past. Suddenly, lights flashing, 8 cop cars descend on us, blocking us in at all angles. I slump in my seat.

A 60-year old African American woman climbs out of the SUV, and starts screaming at the cops. One of the cops very gently approaches me and gets my side of the story, but then are interrupted as we both turn aghast towards the Navigator. The woman pops the back hatch, pulls out a stroller, and proceeds to take an infant out of the back set and pop his car carrier!

The cop informs me that they have to wait just a little bit while the Maryland cops arrive, since the incident technically happened in Maryland, right before we entered. Several of the officers come by and congratulate me on staying on her and running her down! 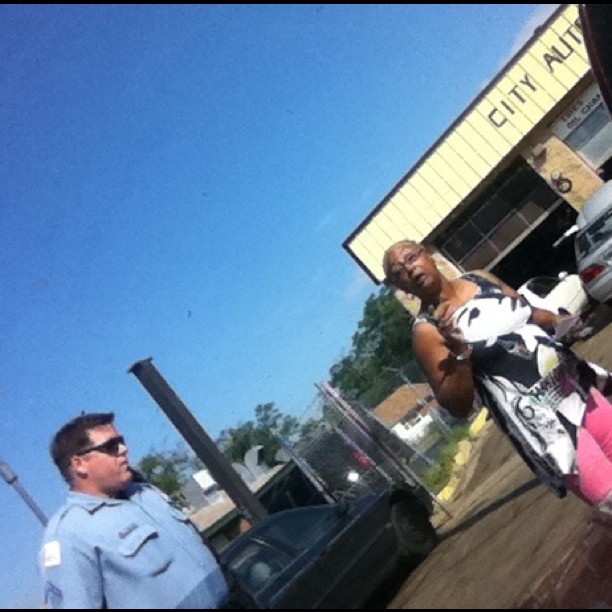 I finally calm down enough (and the officers gently bring the woman over to one side) that I’m able to get out of the car and go to snap some pictures. 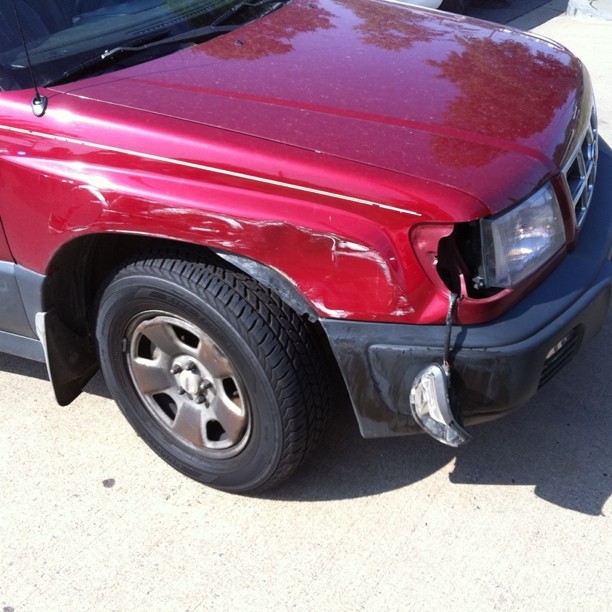 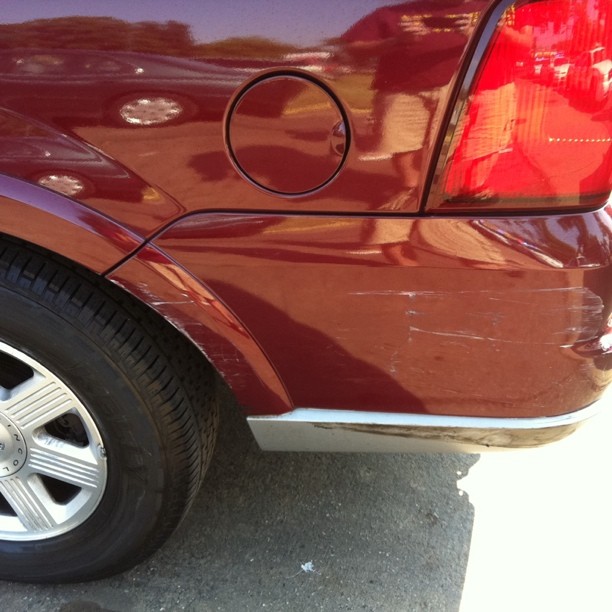 The Maryland officer gets on the scene, and goes and talkes to the woman first. He then starts talking to me, and getting my side of the story, and then says; “Well, it’s abundantly clear that she’s at fault here. Do you want to press charges for the hit-and-run?”

Leading me for 5 miles and cutting me off as many times as she could? Absolutely yes.

He takes my liscence and registration for bit, then comes back, hands me a case number card and her policy information. He tells me he’s only trading insurance policy numbers, because the woman is obviously unstable, and doesn’t feel comfortable giving my direct information to her. I didn’t even know that was possible!

He then tells me I’m free to go. I drive off to a secluded area and phone the insurance companies.

At this point, I’m back at work, but her insurance company has already claimed fault, so I’ll be bringing our car in to be fixed this evening.

I’m just glad I’m safe, but what an exciting ride!