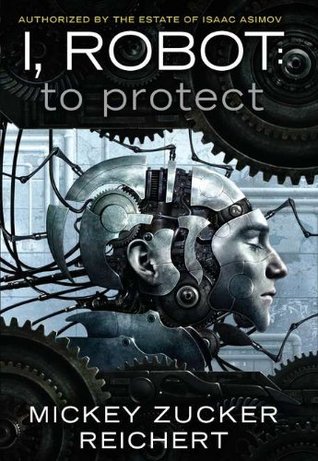 I did not like this book.
Not because it is a bad book, but because it tries to be something it is clearly not.
An Asimov book.

I am no stranger to spinoff books, which were written after the author has passed on. Caliban is one of my favourite books about robots.

However, this book just does not fit in the universe that Mickey Zucker Reichert tries to shoehorn itself into.

This book is like a rather long episode of House, with the occasional robot thrown in. Other than a few passing mentions about the Laws of Robotics and the introduction of a few of Asimov‘s characters, it there’s no resemblance whatsoever to Asimov‘s series.

Isaac Asimov wrote a list of recommended reading to his Foundation and Robots series. Even though chronologically, this book would take place towards the beginning of that series, it is quite clear that the author only has a superficial understanding of who Susan Calvin is and the world Asimov created, and at least did not seem to read very much into the series.

Chronologically, Asimov’s The Caves Of Steel is supposed to follow this Reichert trilogy (of which I will be reading no more of).
It is in The Caves Of Steel that Asimov introduces even the concept of a Humaniform robot; a robot that passes for a human. That humaniform robot, R. Daneel Olivaw, while in the perfect appearance of a man, does not have the customs or mannerisms of a human being, which gives it away as a robot.

Chronologically before The Caves of Steel, all of Isaac Asimov‘s robots short stories come. This is where his character Susan Calvin, the star of Reichert’s novel, is introduced.

However, in Asimov’s stories, at no point does she ever encounter a robot who bears even a slight passing to a human being. They are all described as man-shaped, but completely metal.

In this book, there is a Humaniform Robot, Nate, who is indistinguishable from all human beings. Not only does he look like a human being, but he also has a ridiculous number of mannerisms that match a human being as well, and even flirts with Dr. Calvin.
All this, we are apparently to believe, happens several hundred years BEFORE The Caves Of Steel, where the first Humaniform robot is introduced.

There are also technologies that Asimov never uses. Nanorobots, for example, do medical procedures. In Asimov’s universe, the concept exists, but large robots are shrunk down to a very small size and injected into people.

I wouldn’t even call this book science-fiction. It is more like speculative medicine instead. It is chock-full of medical jargon, which only those well-versed in medical fields would even be able to handle. She doesn’t do a good job of explaining the jargon as she plows through it, merely leaving it to dizzy the readers in a sleight-of-hand to lead them to believe that she knows what she’s talking about.

Even the actual basis of the deus ex machina that ends the book (spoiler ahead), doesn’t even follow the rules that the author sets out.

The book’s climax is the catastrophic explosion of a four-year-old psychopath who has Nanorobots implanted into her head, which was coded to convince her to detonate a bomb that is strapped to her chest.

However, that doesn’t make consistent sense, given the author’s own description of how the three laws of robotics work.

Previously in the story, two other similarly controlled people also detonate themselves, but the three laws of robotics prevent them from harming others around them. However, the four-year-old manages to blow up the boyfriend of Susan Calvin, somehow ignoring the three laws.

These are not, by far, all of the inconsistencies and anachronisms in the book, but they are the most egregious.

The romantic scenes are… cheap? They feel like badly done harlequin novels. Nearly all the men Susan encounters are “tall, slim, muscular, and have tousled hair”. It gets old really fast, and feels like a poorly done male author’s attempt to write from a woman’s perspective and failing badly.

While Reichert does a decent job laying out some of the broader themes of this society for humanity and anti-robot sentiment, she tries to shove too many things into this book that don’t necessarily belong.

The story also has weird transphobic commentary, and even a random Islamophobic rant thrown into the middle of a section that had nothing to do with the story. The author was trying to make sense of The Society For Humanity’s extremism, but instead of using home-grown examples like the KKK or neo-Nazi movement, instead chose to vilify a religion.

To that point, the book also shoehorns in non-white characters but does so in such a way that they are 2-dimensional and othered.
And there are really only two of them.

One is “Diesel”, a Black boy who is perpetually described as a bowling ball and is the only person in the book to have an object-borne nickname. He is Dr. Calvin’s first medical success and slides her into the archetype of white saviourhood.

The other is the homicidal four-year-old psychopath who just happens to be biracial.

I didn’t like this book.
I’ll likely never read anything else from this author. It’s not worth it.