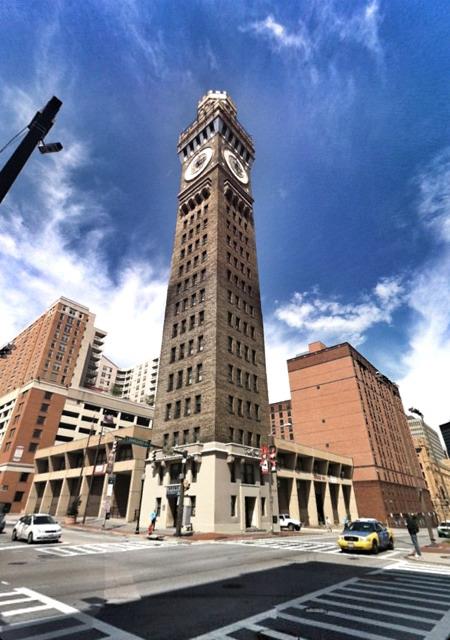 Today was a good day.

Tamika and I got up, had breakfast, and headed out. Our intention was to take the kids to the B&O Railroad museum, but it didn’t turn out that way.

We met up with Eduardo Rodriguez from Gallery 788 to talk business and meet with a new guy who might be helping us with a shipping container—gallery idea. John Podleś came too. Mostly the new guy talked about himself and his own achievements, but he did have some good ideas. Eduardo needed some help with his computer so I tinkered with it a bit.

After that, we drove over to a meeting at the Bromo Seltzer Art Tower. I met Barbara Bryan at the Atwater’s in Catonsville while I was taking down the Who Said What Art Show, and she mentioned that she worked for the Bromo Tower downtown. She said she really liked my work, and to please send her my information. I did, and got set up for a meeting with Betsy Stone, the towers curator.

I didn’t know much about the Tower before hand, so when I walked up to it, everything took me by surprise. First of all, the photo doesn’t do it justice. It’s huge. The clock face itself it a foot wider than Big Ben. Betsy met me at the door and ushered me in, while Tamika and the kids took a ride to get some Starbucks.

The tower was old and beautiful inside. They essentially rent out portions of the rooms in the tower as artist and writer studios, band practice areas, etc. The city acquired the building and fixed it up with that purpose, essentially launching the Baltimore Arts District. The rooms weren’t especially pricey, but way more than I could afford, but I humoured Betsy let her show me around. The place was so cool, I didn’t mind a bit…

When we finally got to the top, she asked if I’d like to see the clock itself. I grinned ear to ear. 🙂 The whole place looked like the movie Hugo. Gears everywhere, things whirring, turning; light pouring through the giant round frosted windows. It was SO cool.

We made our way back to the bottom, and she reviewed everything for me. I politely thanked her for the tour, but let here know this was far out of my price range. She asked to see my work, and I happily obliged and pulled out the iPad, explaining the whole Who Said What tour, how we did it, and Tamika’s work in inspiring me.

She really liked the work! She explained that they frequently held shows in the atrium of the tower, as well as had space they curated at the top of the Baltimore World Trade Center, a popular tourist destination. I was shocked and surprised. She told me to send her samples of the work, and let her know when it was available so they could show it. Nothing is set up yet, of course, but I was stunned. I thanked her about 10 times, and made my exit.

Tamika and the kids and I headed home for some spaghetti dinner, and then the kids went over to Apit’s. Charles Hofsommer, one of my friends, invited Tamika and I out to see Iron Man 3 with his friends Dave and Dave (I know. :D). We met up at the Tilted Kilt, and discussed social security over some beers. I really like Charles’ friends, they’re really cool. It was a really good debate, discussing whether or not the government has a right to control our money. Both Daves were on opposite sides of the view, but no voices were raised, and everything stayed amicable. Tamika and I were impressed.

Iron Man 3 was good. Fun to watch. The effects when the suit’s faceplate opened seemed hastily done (Iron Man appears to have a tiny head and giant face), the Christmas theme is a bit overbearing, and it has the lamest after credits scene of any Marvel movie to date. But it was still worth the watch. The (rest of the) effects are incredible.

A good day. A happy birthday. 🙂