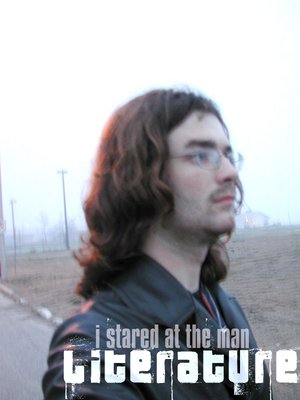 Any more description would be overkill.

I stared at the man, suddenly, shockingly, realizing who he was.
The steam from my breakfast wafted up into my nostrils. 2 hotcakes, tasting more like stainless steal than batter… but that was alright, you could coat them with cheap lard and drown them with artificial maple flavour (with added caramel colour) and they would slide right down.
My pitiful pile of eggs cowered in the corner of my Styrofoam tray; their nutrients whipped away, leaving them flavourless, hidden underneath the dripping residue of whatever my preprocessed sausage patty and biscuit had been cooked in.
I bit into my hashbrown, carefully wrapped in a waxpaper sheath so I could not feel with my fingers the half-cup of oil I was ingesting.
I. I had been degraded to this. I, the strong savage adventurer of the great white north, I, who had survived for days on end what was mine to trap in the bush, I, who had lived with the scent of pines in my breath, who was raised by the Naskapi, who was strengthened by the rich meat of the caribou, Canadian goose and lake trout, I, I had been reduced to this. Scraping greasy mass produced filth off a non-biodegradable platter with a plastic spoon and shoveling it into my mouth. I had been degraded, AND by my own doing.

I stared at the man, suddenly, shockingly, realizing who he was.
I had given into the pressure of the giant yellow magnet (that IS what the M stands for, isn’t it?).
Lured off the road by cheap prices, and their shapely African-American ad model smiling widely and purring thickly “I’m Lovin’ it!”™; I had pulled my car into the lot, ordered my food, and sat down on the sticky red bench to ingest. It was my duty. Doing my part. My four dollars and seven cents was making some fat white man somewhere rich. My four dollars and seven cents (one dollar and thirteen cents of which had actually paid for the price of my food) was robbing some delicate mom & pop breakfast shop of the four dollars and seven cents I could have given them for a decent meal.

I stared at the man, suddenly, shockingly, realizing who he was.
He hunched over a cheap plastic display case of cheap plastic sponsored children’s toys (not suitable for munchkins under 3) smiling. He smiled down at me, his wide hips emblazoned with the logo and tilted off to one side gauntly. Green signs displaying new salads (in a meager attempt fluttered over his shock of a red afro in the artificial breeze of the air conditioners. His shoes were the same, but now they had been spray painted bright red and garnished with bright yellow laces to match his striped socks. The shoes were no longer a coal-stained brown, no longer had holes big enough to drive a train through, but were still the same shoes. His nose had a spot of red on it, carefully placed to make it seem larger, wider, flatter. His eyes, (though tear stained; his mascara running down his face) sparkled. And his lips. His lips were huge. Shockingly red, they took up over half his face with a monstrous grin.

I stared at the man, suddenly, shockingly, realizing WHO HE WAS.
I got up.
Of course, now they had painted his face white, an ironic mockery making everything ok.
The elderly silvered man with the Windex spray bottle squirted my table as I headed toward the door, and he gave it a swipe with his disposable towel. I threw my tray in the trash, along with all the rest of the evidence of McHotcakes, McHashbrowns, McEggs, McSausage and the Homogenized, Ultra-Pasteurized, Vitamin A&D added McMilk.
And with it’s “Thank You” flap swinging mockingly, the trash can caused me to shiver with what it wore as a crown. The future was before my very eyes, sitting regally next to the mud-brown used trays. A single cup half-empty of watered down Coke. The African American ad woman stood plastered on the side with her African American daughter smiling. And around them, in every language and alphabet one could read the prophetic words: “I’m Lovin’ it!”.