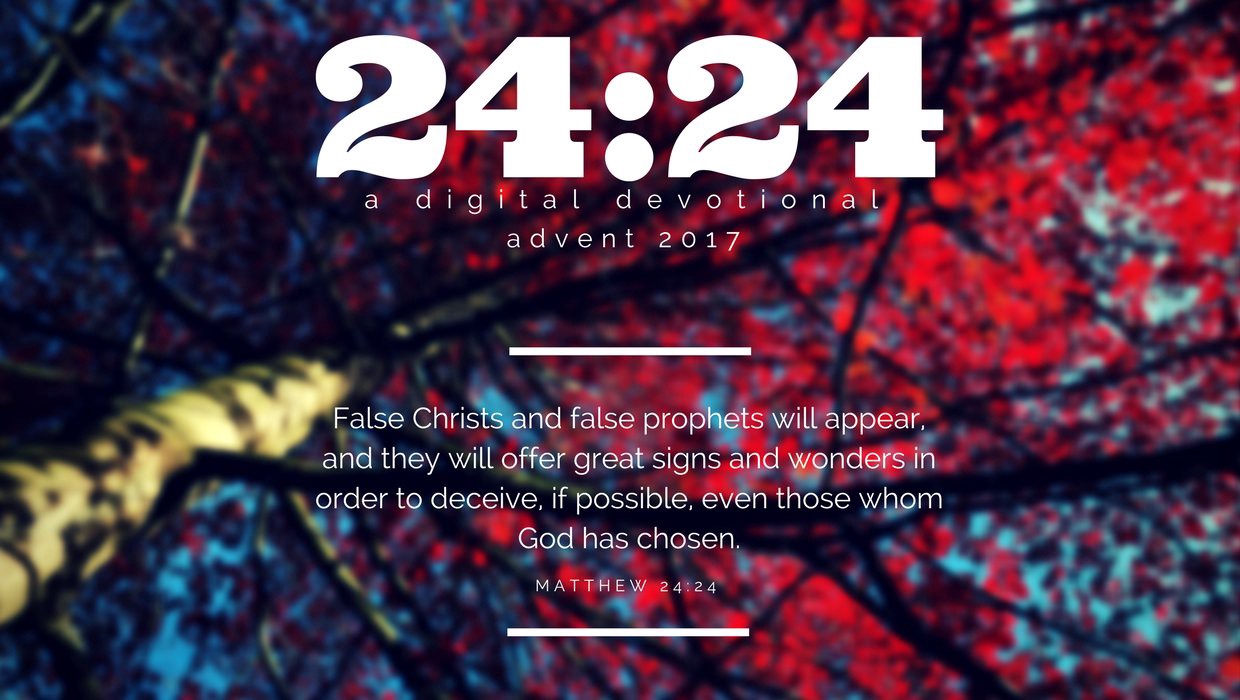 “False Christs and false prophets will come and perform great wonders and miracles. They will try to fool even the people God has chosen, if that is possible.” –Matthew 24:24

When I began reading the Bible on my own, it was from tattered gold-covered copies of the Good News Bible that sat on shelves in the back of our tiny church. Someone had donated them long before my family had arrived in the village we lived in, and they’d seen years of uninterrupted use.

They were filled with illustrations by Annie Vallotton, who depicted figures with simple linework that later influenced some of my sketchings. Services were long and slow, and so to pass the time I’d read from these old tomes. My favourite book to read was Revelation, though I found it curious that it seldom was preached. Filled with fantastic beasts and explosive battles and otherworldly creatures; it was far more interesting than a trek through a desert or the details on how to prepare a sacrifice.

When I asked one of the many priests who came through the revolving door of our church what it was about, he shrugged and said quietly “the future.”

When my parents would journey to the States to drum up support for their translation work, I would try to get my hands on as many of Chick Publications tracts as I could sitting in the vestibules of the churches we visited. The short oddly-shaped comic books were designed to be evangelism tools (with quite a bit of problematic theology that I’d later learn about). The artistic style was a lot like MAD Magazine and was visually compelling. But the way they treated prophetic words like Revelation was more like Black Mirror or The Twilight Zone than anything else. There was even one tract which depicted a guillotine mounted on a scooter, which the police would use to drive around and behead anyone who didn’t have “the mark of the beast.” It was gruesome and horrifying.

And so for a long time, I thought “prophecies” were just as my priest had described; a series of visions and warnings of the future. These things were going to happen, at some point.

What I’m finding more and more, however, is that Christianity as a whole seems perpetually focused on the future. There seems to be a tendency to ignore the here and now, and set sights on The Second Coming, or the Apocalypse, or Death; the time when everyone rejoins our maker in heaven.

But what if prophecy was about something more than that? What if these words were about our past and not just our future? I think about the role Christianity has had in the conquest of nations, in the institution of slavery, in the spreading of colonialism, in the subjugation of peoples, in the stifling of science, in the silencing of the marginalized… and I think, what if the false prophets are already here?

You don’t have to go further back than yesterday to see how Christians have idolized America. It’s still currently happening. We claim that we are the best at everything, and broadcast it on every channel to every corner of the world.

And yet hypocritically, we, as a country, have committed some of the worst atrocities. We murder foreign leaders we don’t like. We import drugs into our communities, and then make movies celebrating that fact. We deny things like water two cities we deem disposable. We refuse aid to lands like Puerto Rico. We reject the rights of Indigenous people not have poison flowing through pipes on their lands. We feed Black men to the mouth of the beast of the criminal justice system. Across all spectrums of business, we subjugate and abuse, and marginalize voices of women. We sacrifice our school children to the god of the firearm.

Fueled by white supremacy, driven by greed and a slave to the injustice it manifested, America is elevated as something that was great but was really built foundations that are rotten and untrustworthy.

For something to be “great again”, there has to be a period that you can point you in the past that in which that something was genuinely great. But at no point in history was America great for all peoples. And so it cannot be great again.

What if the prophecy has already been fulfilled, and we are left to be the ones who are called to make reparations and bring about reconciliation? Not to be saviours of the world who ride in on shining horses, but humble servants of Christ who admit the barbarism done in His name, ready and willing to do the work of helping bring about real positive change?

The thing about apocalyptic prophetic literature in the Bible is that it’s a warning against what may come. In our case, many of the atrocities have already been committed. Much of the damage is done.

But that doesn’t mean we can’t change now. We can still heed the warning. We can fight the system of justice. If we recognize ourselves as the authors of the system, then we can again choose to be true prophets, of a different type. But as Christ ends the chapter in Matthew, He is adamant: time is running out.

If you liked this devotional, you should check out the rest of this series by a variety of talented artists and writers. You can find them all at Slate Project. Subscribe to them, support them, listen to them.

Thanks for reading. If you want to support my writing and other ventures, you can send me some encouragement here:
Benjamin Jancewicz is creating Vector Art | Patreon