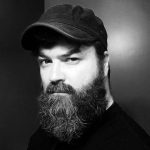 He showed me in many ways how He could use me in more ways in Art than in Engineering. Art is what held my passion, and my greatest talents. After much praying and talking with many of the professors in various departments at Messiah, I made the decision of transferring to a Graphic Arts major.

I am the president & founder of Zerflin, which he created in 2000. Though it is among many talents, vector illustrations would be considered my forté and my favourite choice of artistic expressions.